For those who didn’t head out to PodCamp Toronto this weekend, another UnConference launched in New England – NewBCamp. Very closely aligned in concept (though no connection) to PodCamp Pittsburgh‘s BootCamp PGH, NewBCamp was created by Sara Streeter, a student at Johnson & Wales University, to achieve the dual goals of introducing new people to the various technologies available and to energize the Providence area technology scene with the power of new media.

I went to NewBCamp to share a little and see someone else’s take on the UnConference idea, and I’m pleased to say that NewBCamp is very much the same energy, enthusiasm, and excitement that embodies the PodCamp series of events. I think the Providence area has got its own UnConference series, and it’ll be interesting to see if NewBCamp and BootCamp can work together, since they’re so closely aligned. 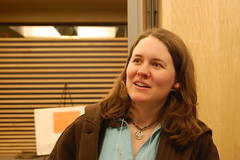 Even a veteran can learn lots of new stuff, and I’m certainly no exception. Sara’s session, Speed Mentoring, is an absolute gem of a session that I would love to incorporate into PodCamps. It’s like Speed Dating, but instead of relationships, a few people self-designate as mentors in specific topics, and then folks in the room can cluster towards topics that they’re interested in or that they need help in. Those small, focused discussions were revelatory in their own right, but I think the Speed Mentoring concept is a nice twist to conversation.

I had the opportunity to fine-tune and present a more story-like version of my New Media 101 session. Matthew Ebel was kind enough to stream it on uStream.tv, and recorded part of it here:

A full version with better audio will be produced and released soon. 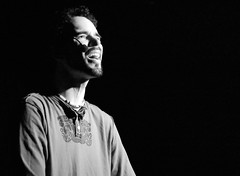 The day concluded with a concert at AS220 in Providence with Matthew Ebel. Over 90 minutes, Matthew took us all on a fantastic musical tour of his work, including a new version of probably my all time favorite song of his, I Will Wait For You.

NewBCamp was a fantastic experience, and I hope to see it flourish and accomplish its twin missions of introducing new people to technology and bringing a boost to the Providence technology and new media sectors.

“The sun’s coming up in the morning, and I’ll be there…”