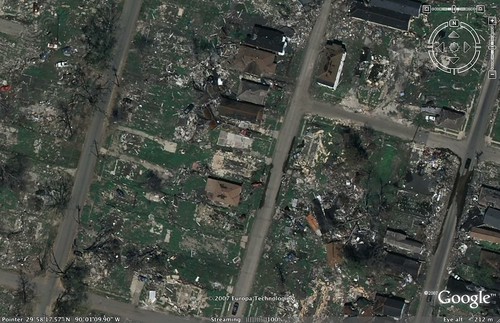 – Billy Joel, “Everybody Loves You Now”

This is a picture of the Lower 9th Ward of New Orleans, captured by Europa in 2007. Despite nearly 2 years since Katrina devastated the Gulf Coast, little progress is being made in fairly large sections of New Orleans.

For perspective, how large is this region of the city? About 1.6 miles by 1.2 miles, or just under two square miles. If it were Manhattan, it’d be the same area from West 53rd to 19th and from 10th Avenue to Lexington Avenue – or most of midtown. If it were Boston, it’d be from Government Center to Kenmore Square and from the Charles River to Jamaica Plain – most of the western part of the city. Know San Francisco? The Lower 9th Ward of New Orleans is almost identical in size to all of Golden Gate National Park. Know DC? It’s the same area as the Lincoln Memorial to the Smithsonian by the Lincoln to Dupont Circle. Been to Disney World? The Lower 9th is the same size as the Magic Kingdom – plus Epcot, MGM, and the Animal Kingdom.

This is a large chunk of a major American city that has not been rebuilt.