You Ask, I Answer: Favorite Tools for Automating Tasks? 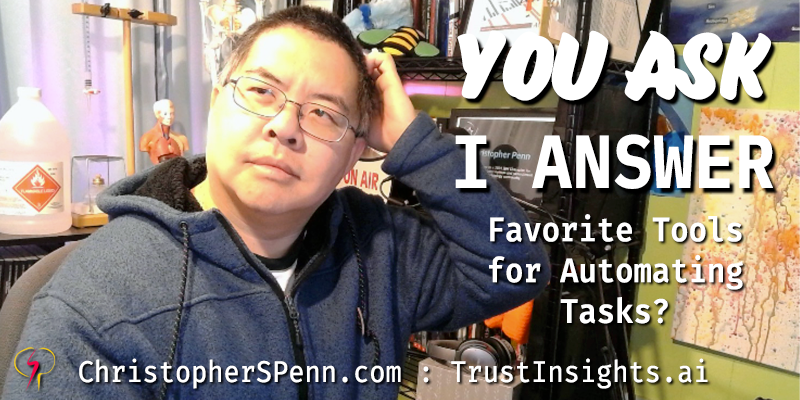 Ann asks, “What are the main tools you use to automate tasks?”

You Ask, I Answer: Favorite Tools for Automating Tasks?
Watch this video on YouTube.

In today’s episode and asks, What are the main tools you use to automate tasks? Gosh, well, there’s a lot to choose from.

But the two that I use the most that are the most efficient at automation.

One is called the Z shell.

This is a shell operating environment for any Unix like system.

So on that command line, you can give short commands to tell your computer to do stuff and make a folder, delete something, etc.

But you can also create little scripts, and I have a gazillion little scripts to rename files to move files from one place to another, to gather up different file types and put them in their appropriate folders to organize and sort through lists and text files and stuff.

convert from one format to another using tools like Pandoc, or FFmpeg, to convert a piece of video to a piece of audio, the the Unix design philosophy in general, which incorporates things like the bash shell, the Z shell, the so on and so forth, are all about having lots of little best in class utilities.

So utility that does one thing, but does that one thing really, really well compare that to monolithic applications, which try to be a little bit of everything like the Finder, for example, on a Mac, or just the Windows operating system on a PC, it tries to be a bunch of things, and then it’s not really good at any one of them.

Whereas in the Unix world, it very much is, here’s this utility, and this is all it does.

And you can chain utilities together with a shell like piping commands together, we’re piping outputs to other locations, invoking pieces of software, like Python, or R from the command line.

All of those are things that I use a lot for automating tasks, because I want to be able to perform lots of interesting granular little tasks and sort of chained them all together.

So that I don’t need to have you I don’t need to reinvent the wheel every single time I perform some kind of task, I can simply pull up the utilities I need chain them together with commands, and we’re off and running.

The second major tool that I use for heavy automation is the R programming language itself.

So the R language and the companion R Studio development environment.

R is a statistical language.

But as with so many things, it has ballooned to incorporate things like machine learning, and computer vision and all sorts of stuff.

But I use it so much for connecting to different marketing automation systems, marketing systems like Google Analytics, Hubspot, etc.

And pulling data from all these different sources into one place where I can do analysis on that data.

Because the channel, the challenge we have with so many of our marketing systems is they don’t really talk to each other.

But when you bring all your data into one place, you can use language like R to code and unify all that data.

I was doing some of this last week for a client where they had data and spreadsheets had data and Google Analytics and Adobe analytics, you name it.

And using our I was able to massage all that data to get the get it unified into one view of the data and then perform an analytics and analysis and visualization from that.

So those are the two main tools that I use to automate tasks because they’re just so incredibly powerful, they’re flexible.

And by and large, they’re free, right? Most of the utilities in the Unix operating system are built into the OS.

The Mac operating system, which we all think of the same sort of graphical environment that Windows has.

And so it’s incorporated there as well.

And even in Windows, if you bring up a command shell, there is a a Unix like system, in some cases, the sort of the native Windows command language or in I believe it’s Windows 10.

And after you can actually get the Ubuntu Linux subsystem entirely within Windows, right? So you can have that command line system with all the same commands right within Windows.

And once you get in the habit of, of learning how these two different automation environments work, you get more productive immediately.

Because once you write a piece of code, as long as it works, you don’t have to write it again, right? Whenever you approach that same task the next time, you just hit run, and it does the thing again, that’s the beauty of automation.

That’s what makes a code based automation system is so much better than a lot of other tools.

Because the amount of rework you have to do if you do it, well is minimal.

Right? When I need to process my Google Analytics data, I just type in, you know, like, our scripts that Mike my script name, hit go, and it does its thing, and then I check in on it an hour later.

And it’s it’s done, I don’t have to do any additional work.

Whereas a lot of other scripting systems, they are not as hands off.

That said, there’s nothing wrong with those systems, any automation is better than none.

Any automation is better than none.

So wherever you can find automated ways to reduce the amount of time that it takes to do repeatable tasks, do it, do it by whatever means available to you.

Because saving time is saving time even shaving a few seconds off a task if that’s the task you do every day, that time does add up.

There are a lot of tools out there that you can use to automate tasks.

Check to see what’s built into the the tools in the software that you already own, because you’d be surprised at just how robust they are.