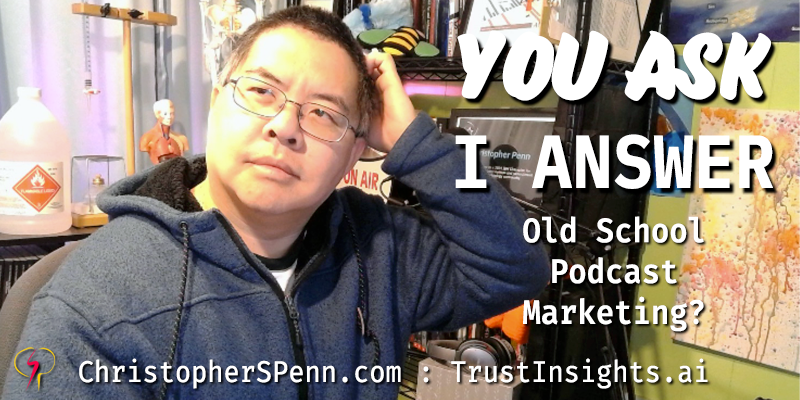 Lauren asks, “What are the three biggest old school podcast marketing techniques we need to bring back?”

In this episode, Lauren asks, What are the three biggest old school podcast marketing techniques we need to bring back.

And then there’s the modern era, the oldest of the old school techniques, there are three that people have forgotten about.

The first one is the promo, promos are nothing more than a 30 to 62nd ad spot that you create.

And then you trade with a podcaster.

Presumably someone who has a similar audience or an audience you’d like to reach, and Whose show is roughly about the same size as you so back in the early days, when I ran the financial aid podcast, I would trade promos with CeCe Chapman’s accident hat I would trade with the daily source code, when it came around marketing over coffee was one of the early shows.

There was this group of folks called New England podcasters.

So Clinton Alward of Steve Garfield, oh, gosh, I can’t remember the the one couple getting so much trouble.

And we would all have promos for each other shows we’d run them as if they were ads.

We didn’t trade any money.

We didn’t trade any tracking codes, nothing.

It was just a way to to help grow the medium.

Back in the day when they were maybe 50,000 podcast listeners total in the world, right? Because back then you needed your own podcasting software of some kind.

Support for podcasts wasn’t introduced into iTunes, until I think it was 2005 might have been 2006, I’d have to go back and look.

So it was it was a very small audience.

So anything that you could do to tap into other audiences of the people who were really, really podcast efficient autos, promos was a great way to do it.

Second thing, guest hosting guest hosting again, one of those things where you would show up on somebody else’s show and you would do an episode of their show as if you were them.

So I guest hosted Uturn cafe, I did, I guess host accident hash, I don’t remember.

And a few other shows, a couple of folks guest hosted my show the financial aid podcast.

And it was a way for audiences to experience the hosting mannerisms of somebody else with the same content.

So, for example, John Wall guest hosted the financial aid podcast, and it was we usually did around April Fool’s.

That way it was, you know, people didn’t take it too seriously.

And it was it was done in good fun and stuff.

Because, again, it’s a way to introduce people, you would typically tell your own audience Hey, next week, John is going to come to my show, I’m gonna do his show.

So catch me over there.

And obviously people who were were already subscribed to your feed would hear the other host on your feed as well.

It’s a great way to to share talent to share new and different ways of people running their shows a lot, it was a lot of fun.

The third technique that I think needs to come back are collaborations.

Now, this is not new.

It should not sound new, because obviously people have been talking for the last, you know, 10 years about YouTube collaborations and stuff.

But podcast collaborations deep back much, much further than that.

I believe it was either 2005 or 2006 that you saw some of the first very large scale collaborations.

I want to say Adam Curry’s daily source code did a mass collaboration of podcast has about 75 of them, I think, all contributing tracks, singing tracks to if everyday were Christmas.

And I think that was oh six.

Again, it was a huge, huge thing it got some airtime have gotten noticed.

There was a initiative in 2007, led by Mark nem cough,

called bum rush the charts and that was to see if the Apple Music was iTunes at the time algorithm could be influenced by a large number of people purchasing it, recommending it reviewing and stuff all on the same day? And the answer is yes, at the time, that was possible, because again, it wasn’t a huge universe of people, it didn’t take much more than 1000 people to move an album nowadays, of course, with the size of these audiences, it’s much more difficult than that.

But those collaborations were ways, again, of people teaming up, pooling their resources, and being able to create content and create works that they could not have done themselves.

It was it was simply was not possible for an individual or even a couple of individuals to marshal that many resources.

Now, what you’ll notice, and this is in some ways, absent from the podcasting community.

To the extent that it wasn’t the old days, all the old school techniques are based on community on a tight knit community of podcasters.

Who are friends, right, you know, New England, podcasting was by no means a giant, you know, monolithic organization.

It was 15 people who hung out at Kelly’s roast beef at the Jordan’s furniture on Route nine, you know, once or twice a month, and just getting together and talking about what they were working on what they were doing.

What enabled all these techniques today? Does podcasting have the same kind of community? I would argue not as much it does.

And there certainly are groups of people who are in collectives and pods and stuff like that, but not like it used to be.

And so folks were not competing with each other.

They we’re competing with mainstream media just to get noticed, right, just to have anybody tune in.

In your early days of podcasting, you might know each of your listeners personally, right? All 50 of them.

Nowadays, it would be more difficult when you look at all the pitches that come in the inbox of people who want to be a guest on your podcast and stuff like that.

But that comes at the expense of not having as tight knit community and a bit being a much more commercial enterprise where, you know, people are charging guests to be on their show and stuff like that, like I Yeah, sell ads or something.

But that’s kind of odd.

And so that community is not necessarily as strong as others.

There are communities within different groups.

Like for example, Jason Falls has a podcast network and a Marketing podcast Network and Jason’s Well, the oh geez as well.

So his idea is to create that, you know, that sense of community.

Among a niche of podcasts, Hubspot has its own podcast and community, there’s a lot of different podcasts, communities.

The thing that is missing, there was that global sense where you could show up on somebody’s music show, and it wouldn’t necessarily be the same audience, right? It wouldn’t be people with similar interests.

People who listened to accident hasher U turn Cafe probably didn’t listen to the financial aid podcast, or they weren’t financially people or or parents or administrators.

They were just you know, regular folks.

So to make these techniques work, you have to foster a sense of community with fellow podcasters so that you can trade things and make the exchange of value equitable among all parties.

But those will be the three things that that should make a comeback among communities and I would say the community as a whole itself would be great to see come back, but really good question.