You Ask, I Answer: AI and Marketing for New Marketers? 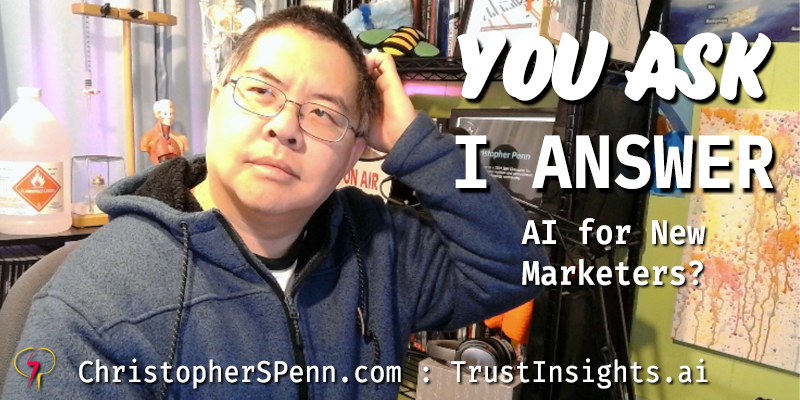 Molly asks, “What should people new to marketing know about AI as they start their careers?”

You Ask, I Answer: AI and Marketing for New Marketers?
Watch this video on YouTube.

In today’s episode, Molly asks, What should people new to marketing know about marketing AI? As they start their careers? That’s a tough question as answer, because we don’t know.

What we do know, what we have seen so far is that artificial intelligence and machine learning have done an exceptional job of taking away individual narrow tasks from people’s jobs.

But then again, most press releases aren’t very good either.

So it’s, it all works out fine.

Machines are getting very good at attribution analysis, things like that.

So there are lots and lots of individual tasks.

The thing I would say to people who are starting out in their careers, is that machines will continue to take away tasks, individual tasks, one at a time.

And what this means for you, is that you’ve got to continue to focus on in your career tasks that are multidisciplinary in nature, because those are much, much harder for machines to replicate.

If you’re good at just inbound sales, there are a whole bunch of things in that job that can get automated out from under you.

On the other hand, if you’re good at inbound sales, and you’re good at psychology, you bring depth to that role, and to how you do your job, that machine’s would find very, very difficult to replicate.

If you are a writer, you know, machines are starting to write content.

But if you are a writer, and a subject matter expert in something that machines don’t have a lot of broad content to draw on.

Remember that all artificial intelligence and machine learning is contingent upon having enough data to train a model, which is a machine written piece of software to replicate what has already been done in some fashion.

That breaks down when you start having niches of content, or any any data where there isn’t enough of it.

Writing about the environmental impact of co2 on deep sea fish, there’s not a lot of content to start from.

Right, there’s not a lot of content for a machine to learn from.

And as a result, it will be very difficult for a machine to create new content on that topic.

Because it didn’t have anything to train on.

How commonplace is the task? I need to write a sales email? Well, guess what? That’s something that there’s millions of examples for and most of them are about the same.

Right? I need to write a blog post about marketing automation.

So that’s pretty easy for machines to learn.

I need to write a blog post about a billion billionaires acquisition of a social network, and its implications for privacy legislation.

Not a whole lot has been written about that particular angle.

So the there’s what’s called sparseness, the sparseness of data in that line of inquiry.

And so a lot of models, when they try to generate content on something so niche will come up with generic platitudes, maybe, and maybe a few usable sentences, but for the most part, you’re going to keep getting word salad.

language models, in particular have not figured out how to deal with sparsity in niches yet.

The more you are multidisciplinary, the more you have very specialized knowledge.

The more that you can combine things together in ways that are unusual, the harder it is for a machine to do those things.

If you are somebody who is very strong in the visual arts, and you’re somebody who’s good at sales, you’ll be able to create sales pitches and sales collateral that machines do can’t dream of because there’s not enough data for it.

And just do a Google search for it.

See how much existing content there is about that thing.

That’s a sign that you found something that the machines, there isn’t enough content for machines to learn about, because Google is real good about finding stuff.

On the other hand, if you type in something, and Google’s like, Here’s page one of 500 million, like, okay, there’s plenty of opportunity to hear from machines to learn, and replicate, and maybe even learn just the best stuff.

Right? Maybe they can, there’s so much content on that thing that they can replicate the top 10% Only and deliver better than average results than a human could.

Because, again, there’s so many examples to train from.

That’s what to think about as you start your career.

Or even if you’re in the middle of your career, or even coming close, you know, on the tail end of your career, artificial intelligence will replicate the most common things.

What are the most common things in there? Those are the things that machines will start to handle and increasingly more and more just taking more of those away.

What are the things that are unusual? And again, look in your inbox? What are those one off weird requests, you get that nobody else could do? Right? So things to think about in your career, especially if you’re early on in your career, is what do people come to you for? That they don’t go to anybody else? There’s nobody else in your company.

We even in your industry, that they would even dream of going to that is something that AI is going to have a real hard time taking away because of your it the only person that machines can learn from as you so give that some thought.