How I Think About NFTs

I minted (created) my first NFT a couple of weeks ago. It sold for something like US$15. While that in no way makes me an expert at any of this, it does at least give me a little perspective on the topic that isn’t purely theoretical or academic. So, what the heck is all this about? Many, many excellent guides have been written on the topic of NFTs. This is not one of them. This is my perspective as someone who has dabbled with the technology and managed to sell at least something.

What Exactly Is An NFT?

NFT is short for non-fungible token, which is meaningless jargon. Let’s dig into what one is. First, we have to deal with two concepts: content value and scarcity.

For most of us, myself included, we value content for its utility. The information we gather, we put to use, and we sell that data, that information to others. Every time you buy a book, stream music or a video, or buy a video game, you are buying access to information and the right to use it in some way.

However, some content has value not because of its utility, but because of its scarcity. Typically, this is because of physical limitations. A baseball card has a natural scarcity in that a certain number of each card are only printed; once those are gone, they’re gone and that cohort of cards can never be replaced. Even though the data on the card is freely available, the data itself is not the value – and in this data-rich world, we sometimes lose sight of that fact.

Obviously, things like NFTs are digital, so in theory, there is no natural resource constraint on the content, so NFTs must introduce scarcity artificially. What an NFT is, basically, is a combination of a software license and a certificate of authenticity.

We’re used to certificates of authenticity. If you’ve ever bought any kind of collectible – Beanie Babies, signed baseball, original artwork, etc. – chances are you’ve gotten an accompanying certificate of authenticity that says you bought the real deal and not a counterfeit.

So an NFT is basically a combination of a software license and a certificate of authenticity – let’s call it a license of authenticity. An NFT creator creates a piece of content and then creates a certain number of licenses for it; these are the NFTs. When you purchase one of these licenses, you are effectively purchasing bragging rights to say you have one of the limited number of licenses for the content.

Think about the difference between a signed and unsigned copy of a book. The data contents are exactly the same; reading the signed version confers just as much benefit as reading the unsigned one. And yet, people will pay silly money for a signed copy of a famous author’s book because of the scarcity. That signature? That’s the equivalent of an NFT. Many, many people could own the book, but relatively few will own a signed edition, and no matter how many people buy the unsigned version of the book, it doesn’t dilute the value of the few signed editions.

Why Would Someone Want to Buy an NFT?

So why would someone want to buy an NFT, a license of authenticity for a digital work? For the same reason people collect anything. They value what the creator makes, and they value the status of being associated with the creator. They also value the potential upside, that their investment could increase in value. Art speculators have been doing this for centuries, if not millennia. 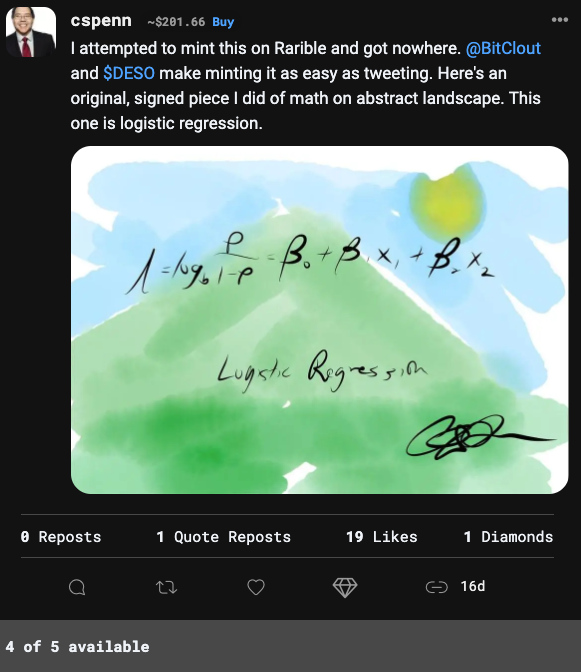 When I created my first NFT, I created 5 licenses of authenticity that go with it. Someone who owns one of those licenses now can say they have the original generation, the only signed copies of it. They have bragging rights. They have whatever status is associated with my art – and therein lies the reason why most people don’t quite get NFTs just yet. Because we don’t value their creators, we don’t see the value of the licenses.

Take a well-known musician; let’s say Billy Joel as our example. Suppose Billy Joel creates 5 licenses of authenticity for a studio recording of Downeaster Alexa and sells them. Five rabid fans go into a bidding war for those licenses and snap them up. They can now say that while everyone can hear that recording, they are the only five people who have this license of authenticity for it, this collectible, this signed copy.

Now, if you don’t like Billy Joel’s music, what are those licenses worth? Nothing. Absolutely nothing. They’re not even worth the electricity needed to operate them. Thus, Billy Joel’s NFT has no value to you, just like a signed copy of a River of Dreams CD would have no value to you.

If you’re a rabid fan of Billy Joel? You want to be able to show your superfan status, so if you have one of those 5 licenses (or one of the original buyers resells it), then you can feel extra special, the same way that a superfan would treasure a signed CD from the artist.

With my NFT, if you don’t value me or my creative works as a fan, then you won’t assign any value to it and won’t see the point of me making licenses of authenticity available – and that’s okay. There’s plenty of content I don’t see the value in, either.

NFTs will grow over time as systems stabilize, winners and losers in the exchanges (auction houses like eBay, for example) are chosen, and more mainstream creators make licensed stuff available. Right now, they’re a niche. In 10 years, assuming the systems reach maturity, they’ll be more mainstream.

Should You Care About NFTs As A Marketer?

Should you, as a content creator, get involved in NFTs? It depends on two things:

Am I all in on NFTs? No. My audience – you – isn’t there yet. But I have my toe in the waters, and I’m trying things out to see how they work. There is definitely potential in the space, and exploring it a bit for yourself would be wise – if for no other reason than to be able to explain it to others.