Friday Foodblogging: How to Make Better Hotel Coffee In Your Room

Today’s topic is usually a culinary joke: hotel coffee. Almost every business traveler has had the same complaints about hotel coffee in the room. Bitter. Weak. Tasteless. Awful. Yet we struggle with it out of need, sometimes even desperation. Is there a better way to make hotel room coffee? Watch the video to learn more:

Friday Foodblogging : How to Make Hotel Room Coffee
Watch this video on YouTube.

Consider the process of making coffee, the culinary chemistry behind our magical elixir of life.The packets of coffee in our hotel rooms aren’t necessarily all that bad. They may not be gourmet coffee, but at least they’re sealed against air and light, two forces which degrade coffee over time. Coffee needs three critical factors to work well: time to brew, water close to boiling temperature, and sufficient quantity of coffee grinds.

The reason hotel room coffee is terrible is because hotel coffee makers fail at all three. Can we save our coffee and ourselves? Perhaps. Let’s dig into each of these factors.

When we brew coffee, if we brew with too few grinds, we overextract it. Coffee contains lots of soluble compounds, and we want as many of the tasty ones as possible with as few of the bitter ones as possible. Too few grinds in the water means we get both sets of compounds. To remedy this, ask the hotel for an additional packet of coffee. If they say no, or they ask for an obscene amount of money, then place both the regular packet and decaf packet in the brewer if it’s a carafe-style basket brewer. If it’s a pod-based brewer with teabag-sized coffee packets, place the extra packet in the bottom of the cup as you brew.

Great coffee typically takes between 3-5 minutes to steep for a good cup. How quickly does the average hotel coffee maker make coffee? About 30 seconds. The reason for this relates to factor one: there’s usually not enough coffee provided to make a good, solid cup, so the brew time is shorter to keep the coffee from becoming bitter. What we end up with, however, is weak coffee. To deal with this, after brewing, remove the packet of coffee from the brewer and put it in your cup to steep for another minute or two, like a teabag.

Afterward, use the stirrers like a pair of chopsticks to drain and remove the packets.

Great coffee comes from nearly boiling water. A good coffeemaker brings water to about 200 Fahrenheit, 93.3 Celsius. At this temperature, all the desirable volatile compounds in the coffee dissolve, and we enjoy a full-bodied cup of coffee.

The little hotel room coffeemakers will raise the temperature of water by about 100 or so degrees Fahrenheit, or 37 Celsius. If we follow the directions and put cold tap water into the coffeemaker – which averages around 65-70F, 18-21C – we will end up with hot, but not near boiling water, and our coffee will brew poorly.

The trick? Ignore the instructions and start with the hottest tap water our hotel room faucet is capable of generating, which will be around 120F or 49C.

By starting hot, our little coffeemaker can bring the water the rest of the way to boiling. We will brew our coffee at the correct temperature, and end up with a much better cup.

Finally, some hotel coffees simply aren’t good. Many hotels source a reasonably good brand name of coffee, but occasionally we’ll end up at a hotel where the coffee is literally brandless generic coffee of questionable quality. Even this coffee can be improved a little. Be sure to snag a few single-serving salt packets in your travels and carry them with you. 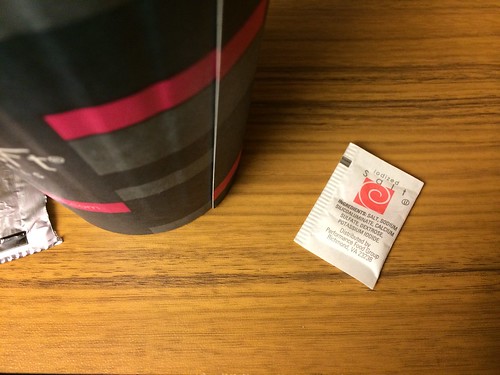 Just a slight pinch of salt – a quarter of a packet or less – can be enough to mellow out a bitter cup of coffee. Salt partially blocks the neuro-receptors on our tongues which detect bitterness, helping the hotel coffee to taste more like coffee should.

One final tip for the business traveler: a few cities, most notably Las Vegas, have the indecency to not provide any coffee whatsoever. Vegas does this because they want us to buy coffee at the hotel coffee shop, conveniently located on the casino floor. To manage this affront to civilized life, consider carrying your own single-serving of a good instant coffee. While at first blush “good instant coffee” seems like an oxymoron, I’ve found a few brands which will make a decent cup. It’s not as good as a brewed cup, but it’s better than $9 for a cup on the casino floor.

If you like the flavor profile of Starbucks, Starbucks VIA is a handy traveling companion. I find it to be fairly pricey for not that good a cup, but that’s my personal preference.

If you like a less heady roast, Douwe Egberts makes an excellent instant coffee, as good as instant can be. I was introduced to this brand when I traveled to the UK and found that hotel rooms there have electric kettles, but no brewers. Apparently, drip coffeemakers are largely an American thing. The rest of the world just uses kettles.

Disclosure: all product links are Amazon affiliate links. This post was originally published in 2010 and has been edited and updated over time. The most recent update added a video.