The future is augmented humanity

Two decades, the idea of cyborgs was mere science fiction. I reflect on this at the 20th anniversary of the conclusion of the Star Trek, the Next Generation TV series, which introduced a villain known to us as the Borg. (Star Trek also conceptualized the iPad, among many other innovative ideas) 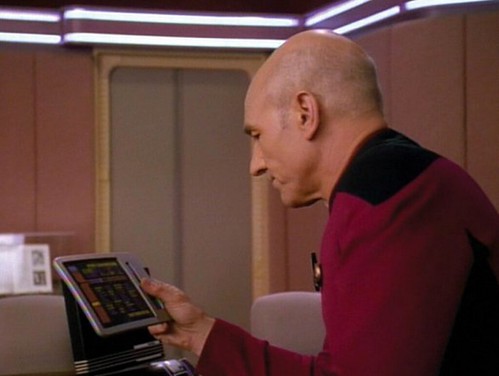 Now, 20 years later, we call cyborgs by different names. Augmented reality. Wearable computing. We are having legitimate, serious conversations as a race about computers that float on your eyeballs and even implanted computer chips. Wireless, non-invasive brain computer interfaces are improving every year, with the latest versions offering up to 99% accuracy through the use of contact EEGs.

In short, we’re making cyborgs. We’re making augmented humans, a little bit at a time, and this is largely okay. The major focus of augmentation right now is to mitigate disability, using technologies to provide sensory inputs that users lost or were not born with.

At some point, augmented humanity will make the jump from disability research to making regular humans better. Google Glass is a tentative first step in this direction, as well as other forms of wearable technology. Already, research is being conducted to vastly expand the capabilities of someone with augmented technology on them; here is a simple example of a virtual keyboard that lets you work anywhere. Much more is to come.

Where this will get interesting is when augmented humans effectively become a separate race, a real race with significant difference from their unaugmented forebears. Imagine a simple job interview. An augmented human with the ability to directly interface with your company’s computers and work at 5-7 times the speed and productivity of an unaugmented worker is going to be the hire of choice. Imagine an augmented graphic designer who, through the use of wearable technology like rings, bracelets, and contact lenses, can design anywhere, any time, and be vastly more productive. Imagine how much more effective an augmented marketer will be who has neural access to the cloud and can simply think commands into and out of a database, to the point where the line between data and the human asking for it can’t be found.

It sounds almost like a bad Star Trek episode (and in fact, at one point it was). But unlike our perspective on the future 20 years ago, these concepts are rooted in real products hitting the market now or within a few years. At a certain point, it’s possible that augmentation will be one of the only ways to remain a viable employee. And unlike the Borg of science fiction past, we will volunteer to be assimilated.