I was shopping at an appliance store recently, when I saw this little tag on one of the appliances: 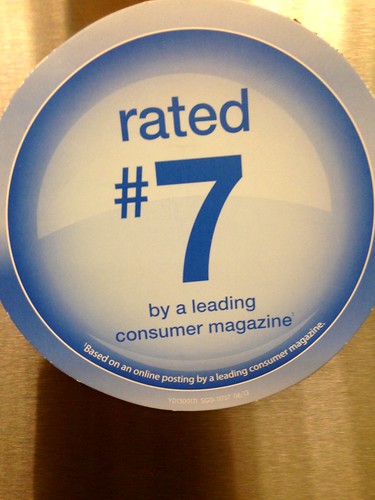 To give you a sense of how this sticker lacks credibility, I could easily call this blog a leading consumer magazine. There’s no qualification of that expression, and to some of you who do perceive me as a leader in our little community, it would even be a somewhat truthful statement. If I asked you in the comments to name your favorite appliances, then I have successfully replicated the methodology used to make this advertisement.

Ask yourself this: would you buy this appliance, part with your hard-earned money, because of a selection of comments on a blog post? In essence, that’s exactly what you’d be doing if you believe this sticker to be credible.

Are consumers so easily beguiled that you can, as a marketer, get away with such a blatantly non-credible advertisement? In a word, yes. A significant enough percentage of the population simply doesn’t care about the credibility of the advertisement. Some people assume (rightly) that it’s all manipulated and paid for anyway, which does happen, especially when it comes to awards. Some people simply don’t care to dig any deeper. They’re busy enough in their lives that the simple statement suffices, credible or not. Of course, some people lack the ability to understand what they should be critical of. They simply don’t know what to look for.

Does this mean that we shouldn’t bother? Does this mean that our efforts to be compliant with AAPOR and other organizations don’t matter? Also in a word, no. Some portion – the discriminating consumer, the educated consumer – will assess our credibility based on what they’re seeing. These folks are the ones we turn to when we ask for advice, when we ask for recommendations. If we lack credibility with the true influencers in our community, then purchases will not happen as frequently. Over time, that lack of credibility will spread until no one believes what you have to say.

Credibility is the table minimum in the marketing game. The moment you get lazy and forsake credibility entirely, as this particular company has done, you fold. You may win other hands, but you’re on a path to lose the game.