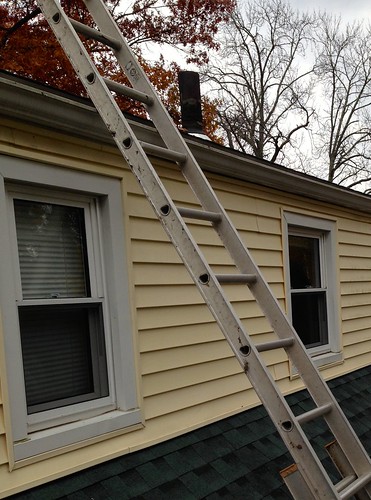 Over the weekend, I did one of my least favorite seasonal things: climbing up onto the roof of the house and cleaning out the gutters. The reason why this task is among my least favorite isn’t because it’s cleaning (which is admittedly boring most of the time), but because it requires me to face one of the fears I’ve had since I was a child, a fear of heights.

My earliest memory of this fear was when I was 5 or 6 years old, visiting a local amusement park. I climbed up a set of cargo nets at the park, and got high enough that I was probably 30 feet off the ground when I slipped. Being cargo nets, I got tangled up almost immediately and didn’t even truly fall, but that was enough to make a negative impression on me about heights.

During my brown belt test in 1999, I took a different kind of fall, dislocating a shoulder on a rock from leaping over a practice sword. After 7 weeks in a sling and another 8 weeks of rehabilitation, I was physically back to normal, but mentally I wasn’t. I had grown fearful of the set of techniques needed to successfully handle that part of the test, and I failed the second time around on that test for that very reason.

One of my instructors, Ken Savage, took me aside and said that unless I answered that fear, unless I tackled it head on, it would continue to grow on me and gain power. So for the next 3 months, I subjected myself to all manner of dive rolling and other sword evasions until that fear lost its grip over me. Before my next test, I drove out to the woods where I took my first brown belt test with a shovel and dug the rock out of the ground, then brought it with me to my third and successful brown belt test.

That technique – the technique of challenging and answering your fears – is one of the greatest benefits I’ve gained from martial arts training over the years. It’s little more than putting yourself willingly against your fears, defeating them over and over again, until the grip they hold lessens. They never go away, but they do lose their power and don’t regain it as long as you choose to not allow them to. That’s one of the greatest secrets of success I’ve ever received: leave no fear unanswered.

That’s why every spring and fall, I’m up on a ladder and clambering across the rooftop, scraping out the leaves. It’s not fun, and my fear of heights speaks loudly to me when I’m up there, but I answer that fear with quiet defiance, one handful of soggy leaves at a time. When I set foot on the ground after I’m done, I stand over my fears once more.