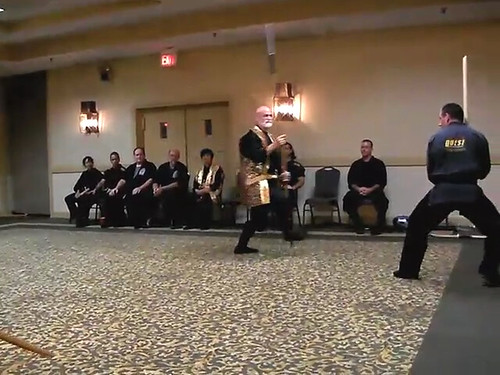 For example, let’s say you’re deeply offended by a particular political position or idea. If you reflexively get angry when you hear that, then someone can make you angry, get you to behave irrationally, and take advantage of you. Maybe they goad you into a fight at the local watering hole that you had no intention of being in. Maybe they convince you to give them money in support of a cause that you’d never rationally support. Whatever the case may be, your buttons got pushed and you reacted.

The ninja mind control method is designed to help you find out what buttons you have and reduce or remove their effects. Through lots of physical training, meditation, study, and practice, you can eventually figure out how to become less angry or scared or enthralled by other people, places, or events. Remove or reduce your weaknesses, give people fewer buttons to push, and you win.

This doesn’t just apply to the individual. Corporations, organizations, and groups are just as susceptible to having their buttons pushed as individual people. Have you ever worked for someone who was obsessed with the competition? Have you ever seen a company chase another competitor, copying every product or service fruitlessly? (look no further than all of the iPad clones in the marketplace) If these companies focused more on mitigating their own weaknesses and strengthening their products and services, they’d be far better off than chasing the tail of the pack leader – and they might even figure out a different path to take that would let them be a leader, rather than myopically following.

Even as marketers, we fall prey to the same human foibles. We allow envy and jealousy of someone else’s brilliant campaign to cloud our minds, forcing ourselves to imitate them rather than fix what’s wrong in our own shops and build our own unique campaigns.

The actual ninja mind control method – gaining control over your own mind – lacks the sexiness and coolness of what you see in comic books and movies, but if you get good at it, it sure does make for a better life. If you’re interested in getting started, I’d recommend these two audio meditations from Stephen K. Hayes in the iTunes store: