The awakening of superhero powers and the salvation of conferences

Let me tell you a brief story about the day I learned about our superhero powers as human beings.

In December of 1994, I went to a Billy Joel concert at Nassau Coliseum during one of the final legs of the River of Dreams tour. I’d been a fan for a while, all through high school, so attending the concert was the pinnacle of fandom for me. That night, Nassau Coliseum was packed to the rafters, 17,000 people and change all stuffed inside, nearly everyone a diehard fan as it was the end of the tour and all the casuals had long since attended. The diehards came out in force because, well, that’s what diehard fans do with their favorite musicians.

…well we’re all in the mood for a melody, and you got us feeling all right… 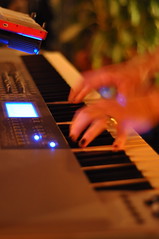 Like many musicians, BIlly Joel has his hit songs and crowd pleasers. He ends every show with his signature song, Piano Man, and the crowd always, always sings along.

The concert was a great one, but it was the ending that floored me. Because it was such a diehard crowd, people had been singing along in little bits and pieces all night long, but from the moment the first notes of Piano Man dropped out of the speakers, the crowd instantly unified into one.

…he knows that it’s me they’ve been coming to see, to forget about life for a while…

Hearing 17,000 people singing along in one massive chorus, nearly every single person in the crowd pouring their hearts and souls into their voices (myself included), was an astonishing moment. It felt like a massive tidal wave of energy as the building shook from that many people unified for one purpose, forgetting about life for a while and leaving their individual selves behind for just a few minutes.

If you’ve had a similar experience, you know exactly what I’m talking about. You leave your body for a little while. You forget that you, the individual exist, and for a few, brief, glorious minutes as you belt out the lyrics you’ve known by heart for years, you touch something far greater than yourself. You touch the spirit of everyone else in the room, hall, or stadium, you join them, and you feel an amazing unity with every person around you.

It was that moment that woke me up to our awe-inspiring power and made me continue to question to this day just what we’re capable of as people, as human beings. What if we could tap into that kind of energy every day instead of just when our favorite musician was in town? What if we could bring that kind of power to everyday moments and not just reserve it for special occasions administered by Ticketmaster?

I think we can. I know we have the capacity, the capability, because I was there when it happened and felt it firsthand. When you touch a moment of unification like that, you feel nearly invincible, immune to all the ills of the world as you’re no longer your single, solitary self but something greater.

Three lessons. First, if you are any kind of performer, marketer, speaker, or entertainer, the more opportunities you have to gather your fans together in real life, when all of the energy we possess as living human beings can be pooled into one room, the greater the chances are that magic will happen. As wonderful as the Internet is, it simply cannot transmit the raw power of that experience. Nothing can. You can’t blog it. You can’t Twitter it. You can’t record it even in HD audio and video and transmit it to someone who wasn’t there any more than you can do so with a first kiss or a bite of the best pie you’ve ever tasted.

Second, no matter who you are, look for experiences that contain the potential for that magic. Even a small gathering can be powerful. The catch is that you have to be there. Over the summer at Matthew Ebel’s VIP Beer Bash, he played one of his signature songs, and the small group of us in that room, at that time, all singing along was no less magical. Sure, it didn’t have the scale of Nassau Coliseum, but there was still the sense of we rather than me, and when I listen to the recording, remembering and reliving that moment, it still brings a smile to my face more than any of his other recordings because of the magical direct experience we all shared.

Third, there is no substitute for being there. You can watch videos of conferences, you can listen to audio recordings of concerts, you can follow the live stream of an event on Twitter, but there simply is no substitute for being there. This above all else is why things like real life social events, conferences, and conventions will never go away, no matter how good our rebroadcast abilities get, because there are so many things that cannot be shared any other way than direct experience. If you’re a conference organizer or planner, the more you can do to facilitate the “you had to be there” moments, the more irreplaceable your conference will be. Having a bunch of talking heads on stage is easily replicated. Having a singalong in the lobby of the conference center (as Chris Brogan did at PodCamp Boston 3) is nearly impossible to replicate. Give people the freedom to create their own magic, and your event will be booked solid just for that alone.