Waiting For Wintergrasp: The Moment to Lead

Waiting For Wintergrasp: The Moment to Lead

People need leaders. They want leaders. They hunger for leaders. In some cases, people are so desperate as a crowd for leadership that they’ll follow and even swear loyalty to terrible leaders, as long as they don’t have to take up the mantle of leadership themselves. Nowhere is this more apparent to thousands of people every day than in Lake Wintergrasp. 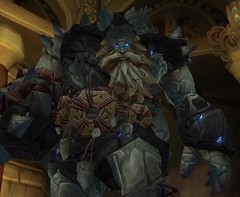 What’s this? If you don’t play World of Warcraft, it’s a really big competition between two teams to take control of a battlefield. Without getting too deep into the mechanics of Wintergrasp, suffice it to say that teams are organized in groups of 40 people, and at a certain point dictated by the game, everyone goes and tries to capture the objectives of the game.

What’s interesting to me as a marketer and student of behavior is what happens before Wintergrasp starts. See, the teams aren’t automatically formed by the game. Teams have to be organized by individual players, and that’s where things get interesting. Very, very few people want to take leadership of a team, even when there are no significant adverse consequences to doing so. Many people simply wait around, asking aloud to be invited to any open team if there is one.

Imagine what this is like – dozens, sometimes hundreds of people milling around looking for leadership. The instant someone forms a team and takes leadership, the entire crowd galvanizes. The team forms up and you’re ready to go within minutes.

What makes this important is that this is a human behavior. Forget for a moment that this occurs in a fantasy role playing game that’s traditionally (and incorrectly) associated with high school kinds and nerds living in parents’ basements. This need for leadership and simultaneous unwillingness to step into a leadership role is an opportunity for you, if you can overcome your own hesitation, to establish yourself in any industry, niche, market, or space.

Is your marketspace crying out for someone, anyone, to take a leadership role and do something as simple as organize a team to accomplish a deed?

Are you looking to build your own personal brand or gain experience? Look for opportunities and marketspaces where people are just milling around, waiting for a leader, and step up. Take on the responsibility of providing leadership, and gain back what you give and more.