My teacher, Mark Davis of the Boston Martial Arts Center, asked us to write a bit about how we got involved in the martial arts and why we’re still here.

Way, way back, as far as 4th or 5th grade in school, I was the short, unathletic kid who ended up getting bullied a fair amount. (the inside of a locker is surprisingly spacious if you’re not claustrophobic) Once I got to high school and found myself in a much larger population including some folks who took bullying rather seriously, I decided in 1989 to try out martial arts and asked my parents to take me to the local YMCA. There I met a teacher of Isshin Ryu karate and spent the next 3 years or so progressing through the grades and material in his school.

Learned some really interesting things from him, too, since he was by occupation a prison guard – things like, if you’re going to beat someone, do it with a garden hose since it doesn’t leave permanent marks for a judge to admit as evidence but still hurts like hell. Stuff like that was what kept me looking for something more in the martial arts than just how to administer a beating to someone else – but whatever it was that was missing from my training, I certainly wasn’t going to get it at the karate school.

All during this time, the ninja boom of the 80s was reaching its peak. I remember hanging out more than a few times in the martial arts section of the local bookstore, looking to see what other interesting things there were out there. One set of books always captivated me – a series of large format ninja books by some guy named Stephen K. Hayes, who was billed as the Western world’s foremost authority on ninjutsu. The ninja warriors seemed like they had it all – superior fighting skills, Jedi-like powers, and the ability to change the world to suit their needs.

Well, it turns out, you really couldn’t sign up. Back then, there were very, very few legitimate ninja schools in existence (and to be truthful, there still are very few that are worth anything) and getting accepted into one of them meant having to rearrange your whole life, so I filed that all away as a wishful teenage boy’s fantasy and kept on training.

My martial arts career, such as it was, took a radical left turn when I went to college. Before going to college, I’d been prepping to take my black belt test in Isshin Ryu, feeling great about the progress I was making in the martial arts, thinking I was all that and a sandwich to boot.

On the first day of the martial arts club meeting, I met a sophomore from Boston named Peter Steeves and learned that he was a junior student at a school called the New England Ninpo Society – one of the very few legitimate ninja schools in the country in Stephen K. Hayes‘ lineage. (today, that’s the Boston Martial Arts Center) I decided to see if this guy Peter was legitimate and at the first workout, unleashed my tournament-winning spinning roundhouse kick.

He politely stepped to the side of it and punched me in the face. After laying on the floor and staring at the ceiling for a while, I asked him what he did. He said, “Well, you kinda missed…” and right then and there I asked him to show me what he’d learned in his training. 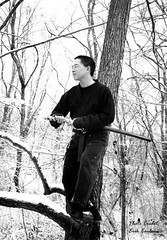 We spent the better part of four years working on whatever he was looking at in his training. Peter would head home during breaks and study with his teachers, Mark Davis and Ken Savage, then bring back whatever he’d learned and we’d try it out to the best of our abilities. Starting in my junior year, during holiday breaks like spring breaks, I’d go to Boston and spend the week taking every class I could at the Boston dojo. Nothing says spring break like traveling to one of the least warm, sunny places in America in early March!

As with all things, life changes. I graduated from college and decided I wanted to train more regularly, so I uprooted my life, quit my job, got accepted to graduate school, and moved to Boston, renting an apartment literally about a 3 minute walk away from the Boston dojo. That was 1998, and I’ve been there ever since.

What’s interesting throughout this entire journey is what kept me in the martial arts. To be blunt, I started in the martial arts because I was tired of being on the receiving end of some bullying and wanted to give back better than I got. One of the starkest lessons I’ve ever learned was that first workout in college – no matter how fast, tough, or powerful you think you are, there’s almost certainly someone else who is going to eat your lunch.

These days, being tough, being some super warrior is fairly far down on the list of motivating things to me. There are so very few things in life that are worth fighting for – family, loved ones, the safety and health of friends – and so many ways in which others can harm you without ever laying a finger on you. Ask anyone who’s ever been unemployed or desperate for money just how vicious life can be, and you quickly realize that being a tough fighter by itself isn’t much help there. Ultimately, a successful martial practitioner has to be able to win no matter what the situation is – and 99% of the battles we fight every day don’t involve bare knuckles or swords.

The reason I still train and go to the dojo twice a week is because so much of the ninjutsu training is about mastering yourself and learning powerful strategies for dealing with the threats to your happiness and the happiness of the people you care about. That’s what keeps me coming back – learning more, refining what I know, and learning some more on top of that.

It’s not just martial arts, either – the meditation and mind sciences in our tradition help me to improve myself from the inside out – everything ranging from understanding why I react in certain ways to how to lose my temper less.

Some of the strategies and ideas I’ve learned in my training I now share, both as an apprentice instructor at the Boston Martial Arts Center, but also in my work in new media and social media. For example, the old ninja battlefield strategy of joei no jutsu finds new life in a case study of using new media to locate a missing child successfully.

I’ll wrap up by saying that everything here is subject to change as I get older and more experienced. I may look back on this post in another decade and laugh my ass off at how ludicrous it seems from the perspective of a mid-40s, 30 year practitioner of the ninja martial arts. I look forward to that day, because it will mean that I’ve grown past what I understand to be true now – and I hope we’ll share the laugh over a beer when I do.