Why does Coca-Cola screw over schools in My Coke Rewards? 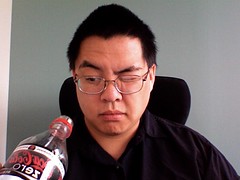 We drink a lot of soda here at the office, since we have a volume deal with a local distributor, one of the many benefits of working at the Student Loan Network. As a result, I collect and redeem a LOT of bottle caps for the My Coke Rewards program. One of my favorite things, of course, is to donate Reward Points to helpful causes, but recently, I was looking at the regular rewards vs. the school rewards programs, and I’ve noticed a distinct sense of unfairness – to help schools, it felt like you had to redeem far more points per material good than in the regular program.

Not being satisfied with a vague feeling, I decided to do a little comparison shopping, and worked up the following spreadsheet.

Notes: PPD is points per dollar. As much as possible, I tried to stick to real world pricing engines like Amazon and Google Checkout, and tried to pick the item depicted in the My Coke Rewards interface in the comparison shopping engines.

My suspicions were not only confirmed, but the magnitude of unfairness is 3.5x – a school item on average is 3.5x more costly in terms of reward points to real world value than the regular giveaway items.

So what gives, Coke? I would think if you’re trying to build goodwill, items in the school channel program would be CHEAPER on a points per dollar basis than regular items, rather than 3.5x more expensive. Is this simply a way of saying that people are suckers when it comes to supporting charity and can’t do math? Or is this saying that Coke would rather hand out trinkets to consumers directly than throw greater financial support to educational programs? (that’s what the numbers say)