A bit of backstory about this particular recipe: I learned it thanks to the power of marketing years ago. I was speaking at the Educational Travel Conference, and at the conference, the trade show floor could only be described as culinary magnificence. Many of the exhibitors were educational departments of embassies, and few things demonstrate a country’s cultural riches like native food.

At the event, I grabbed what looked like a shot glass filled with… something… and I took a bite of the contents. It was magnificent – citrus, sour, salt, fresh herbs, and fish. I had no idea what it was so I asked the sous chef of the Chilean embassy who told me in halting English that it was called ceviche, a seafood dish popular in many South American countries. He said what made Chilean ceviche different was that only the Chileans used grapefruit juice, while other countries stuck to lemon or lime, and only Chilean ceviche used cilantro. I’ve no idea whether there’s any culinary truth to that particular origin story, but I don’t care, either: it’s delicious. 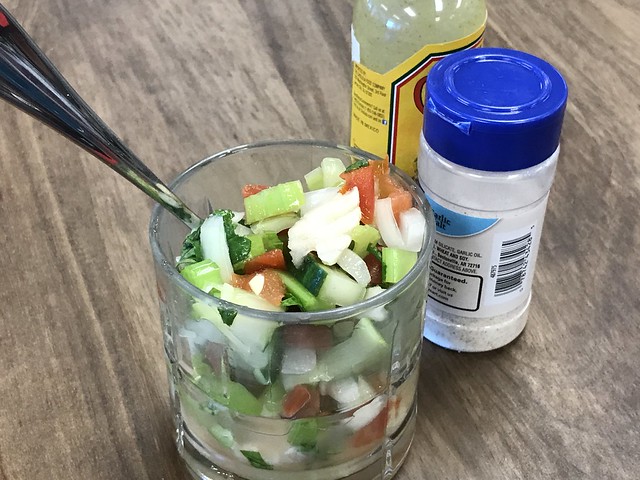 The recipe I found that day called for Chilean sea bass, a nice name for the Patagonian Toothfish (which is a marketing coup in its own right), but I find that tilapia makes for a better taste and texture. It’s entirely up to you which kind of white fish you use as long as it’s relatively mild in flavor. If you’re concerned about freshness and food safety, I recommend buying deep-frozen tilapia filets; deep-frozen fish is generally very safe as long as it’s thawed properly.

Chilean-style ceviche is a wonderful dish any time of year, but it’s especially refreshing during the hot summer months when you want something that isn’t going to make you feel any warmer. It’s easy to prepare, tasty, and healthy, too; the dish is gluten-free as prepared.