The volunteer experience that broke my heart, and why I’ll go back again

I recently had the opportunity to volunteer with my SHIFT Communications colleagues at Boston’s Cradles to Crayons charity. To give a bit of background, Cradles to Crayons accepts new and used goods (clothing, shoes, books, etc.) for homeless and at-risk kids in the Boston and Philadelphia areas. This past year, they were able to serve about 60,000 children in Boston, which sounds like a lot until it’s revealed that they had more than 300,000 requests for assistance. The goal of the charity is simple: to provide for kids who don’t have the basics. 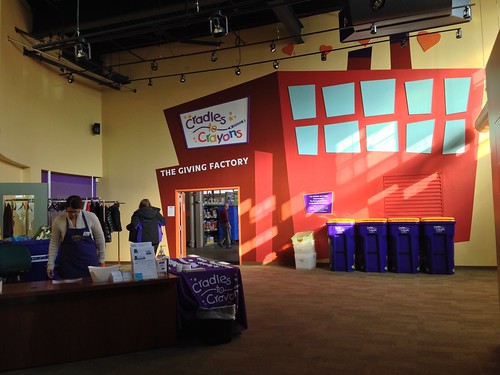 My experience was incredible, powerful, moving, and disturbing all at once. My job was simple as “order fulfillment”: to take slips of paper with kids’ names and genders on them, look at the list of needs, and walk through the warehouse assembling a bundle that would be sent to the child via their social worker. The first couple of “orders” were simple and straightforward. I moved my bundles through production, got them signed off, and loaded in the queue for distribution.

The third order was the wakeup call, the eye-opener. It was for a little four year old girl named Ava, whose holiday list was simple and sorrowful to read: hat and gloves, clothing bundle (~7 days of basic clothing, winter coat, size 7 shoes and winter boots, arts and crafts bundle (paper, crayons, plastic scissors), book bundle (3 books). I grabbed a clothing bundle, noting that the slip said she preferred pink and purple; easy enough as there were multiple bundles that color. Hat and gloves were also bright pink, along with the winter coat that was an off-purple. In the book bin I found a bundle that contained a book I had read to my own daughter many nights, and immediately added that to the package.

Then I got to the shoe bins. The size 7 bin was empty. At the bottom of the bin is a permanently affixed label that said, if this bin is empty, it means we did not receive enough donations. That’s when the day took a gut-wrenching turn. Little Ava, who will get the same books my own child read, who likes the same colors my child did at that age… can’t have shoes or boots, because there aren’t any left?

What do you mean, there aren’t any shoes in her size? She’ll freeze out there in Boston’s winters without decent shoes or boots!

It felt like being punched in the stomach. I grimly marched what I had up to the production line, where the staff sympathized and said, “We do the best we can with what we have, and something is better than nothing.” Something is better than nothing, true. But Ava will still be very, very cold this winter, and snow is coming in a few days, and my heart still hurts for the loss she likely will never know about.

After that, the packages were hit or miss for the next two hours. Some children got everything on their list. Many did not. Jason asked for clothes size 14-16. There were none at all. His bag was pitifully small, with some arts and crafts and books, but few essentials. Yeimi got a winter coat, but no hats or gloves in her size. LaShondra didn’t get winter boots, but at least there was a pair of somewhat warm-feeling shoes. Terrell didn’t get shoes.

I said “I’m sorry” to every single child.

Every child I made a bundle for which I wasn’t able to fulfill completely felt as bad as though I weren’t able to provide for my own. I felt like I had failed them, like I had let them down, even though I didn’t have the tiniest idea who they were. I kept telling myself what the staff recited over and over, something is better than nothing, but it didn’t help.

How much more it must hurt when it truly is your child.

In the end, our team made 90 bundles in about 90 minutes, helping some kids in the Boston area get something for the holidays. When I walked outside, I barely felt the cold of the sub-freezing temperatures, my mind remembering the names of a couple of kids who I wasn’t able to find winter coats for. The cold would not be so easy for them to escape. Something is better than nothing, but sometimes, something isn’t good enough.

If you have the ability to donate your used goods, stuff that’s perfectly usable, consider finding an organization in your area (if you don’t live in Boston or Philadelphia) that fulfills the same needs as Cradles to Crayons and donating your used goods, your time, and whatever other resources you are able to donate. If you have children who have clothes they have outgrown, donate them! Other kids can make great use of hand-me-downs in usable condition.

Even if you have no financial means, donate your labors for a few hours. You might not just help make a child happier, you might be a literal life-saver to them.