Much has been made of a Johns Hopkins student protecting himself with a samurai sword against a home intruder in the local Maryland media (including this story at the Washington Post).

I’d like to take a few moments to say that while the student certainly made effective use of his katana that a katana isn’t exactly the ideal home defense weapon. Here’s why: it’s a really big weapon indoors. Outdoors (where, according to some accounts the confrontation took place, others putting it in the house or in a garage), a katana is a fine weapon. Its length, edge, and relatively lightness (compared to heavier European swords or even older Japanese tachi swords) make it a formidable amplifier, and against a skilled practitioner, it’s extremely hard to overcome. 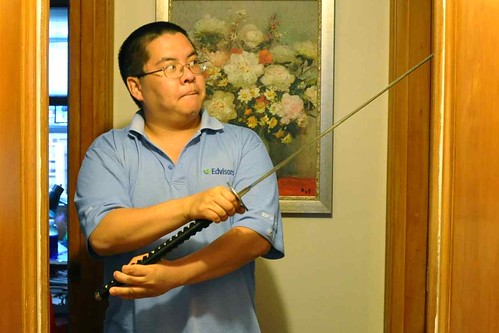 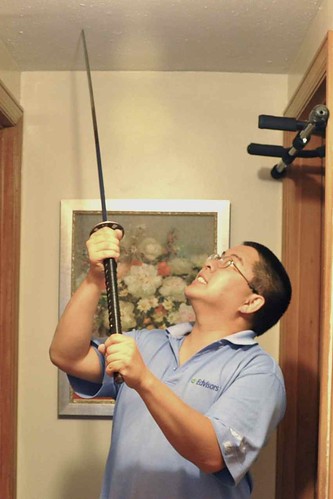 You see the general problem. Unless you’ve had a great deal of practice using a sword indoors, chances are your home, apartment, or office will be working against you with a weapon designed for use on a battlefield.

Please accept these bits of unsolicited advice from a guy who’s practiced with swords a lot and studied self defense a lot:

1. If someone’s in your home and you have the option to do so, run like hell and call the police. No piece of property is worth risking your life for, and virtually everything except maybe sentimental items can be replaced.

2. If running like hell isn’t an option, get yourself and anyone else you care about together inside, lock and bar an interior room, and call the police.

3. If you have no other choice, meaning that either someone you love or you are directly in harm’s way with no other resort, then and only then should you attempt confrontation, and probably not with a sword unless you’ve got nothing else or you’ve got an awful lot of training under your belt. That can of fake lavender air freshener or toilet cleaner under your sink will probably work better to confuse and disorient a home invader long enough to let you escape, rather than a sword.

Other views will differ, of course, but at least in what we teach at the Boston Martial Arts Center, your very best bet is always self preservation, escape and evasion, then defensive tactics, then as a last resort, offensive tactics. Not only does this order of priorities give you the best chance of coming out of a self defense situation safely, but it also is most likely to protect you legally if the case goes to court. If, in your testimonial, you explain to the authorities, the judge and jury, and legal counsel that you made every effort to escape and evade, to defend, and only when you were given no other choice and you believed serious or mortal harm was imminent did you take a life, you are likely to be cleared of any charges of excessive force.