What makes the difference between someone who has confidence, someone who believes in themselves and in their cause, and someone who sits on the sidelines of life? 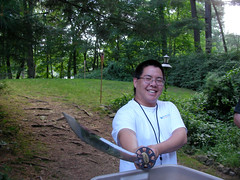 Let me tell you a story about fear, from the martial arts. A long time ago, a decade ago, the test in my dojo to go from green belt (intermediate) to brown belt (advanced) was incredibly rigorous. The test was typically three parts. In the first part, you as the candidate faced off against one of the senior black belts in the dojo. They had a shinai – a four foot bamboo practice sword that, while it wouldn’t cut flesh or break bones, would still hurt like hell. Their mission was to try and beat you with the stick for what seemed like an eternity. Your mission as the candidate was to escape and evade them as much as possible – not even to defend or counterattack (which was usually met with a stick to the face) – just to evade and escape.

The second part of the test was similar but unarmed, and the third part of the test, after your adrenaline was shot and your body was near exhaustion, was to demonstrate techniques in application. Somehow you had to get past your own exhaustion and summon not only physical strength but also intellectual sharpness.

During my first attempt at the brown belt test, I was outside in a rocky field, about halfway through the first part of the test. I had managed to evade with relative success the bamboo sword, when suddenly the sword came at my feet. Instinctively, I did a dive roll over the sword, but badly miscalculated where I was in the field. I landed, shoulder first, on a fairly large rock and dislocated my shoulder.

It took the better part of 3 months to heal that injury, including living in a cast for 6 weeks, and some fairly intensive physical therapy, as I’d separated and torn up a lot of my shoulder. Worse, I’d taken a massive hit to my own confidence. Getting back into the dojo was hard enough, but once I was back in class, I found that I was physically afraid of doing certain techniques for fear of re-injuring myself. It took a lot of time for me to slowly ease myself back into the full swing of things, and before I knew it, testing time had rolled around again.

Suddenly, a test that was a source of anxiety and fear the first time around became a gigantic monster made of fear the second time. I had to fight more than just a black belt with a practice sword – I had to fight my fear of re-injury, my fear of humiliation, my fear of the test and all it had symbolized as my greatest failure in the martial arts to that point.

The second time through, I failed the test again. That was okay, because it didn’t feel like a failure to me – I got through it uninjured, and so at least one fear was put down. One of the senior black belts offered to coach me in the weeks after that second test, to help me with the continued fears of injury by more or less punching me silly every week until I got better and better at evading and escaping.

The third time through the test, I felt the familiar fears, but they were muted. They could shout that I couldn’t do it, that I should just give up, that it was crazy for me to keep taking risks, but what won the day was knowing that I had the tools and the little successes and victories along the way.

Not only did I pass, but I passed well, from what the other judges had said. My fears lost, and in that moment, my passing had exploded the confidence I felt in myself, in my training, in my teachers, and in everything I had done up to that point. All of the darkness fell away, and I came away from the experience transformed, ready to advance, ready to explore my new potential.

I tell you this story so that you can know that your fears can be conquered. Your fears can be beaten. What helped me beat my fears was knowledge and momentum – small successes that to others appeared like defeats but to me were progress against my fears, my greatest enemy. Whatever it is that you fear, start eroding at those fears today. Take little steps, little bites out of the fears. Prove to yourself that you can win against them, that you can beat them back, that you can get out of your own way long enough to win.

The strength that you need to find in yourself comes from that momentum, from those little victories that you string together. If you fear your body image, start walking or running, just a little bit, and commit each day to going just one step farther. If you fear speaking in public, start by speaking to yourself, then speaking to your webcam, then moving to small groups. Take each success and build on it until you’ve built a bridge over your fears.

The final ingredient you’ll need is the support of true friends, friends who will help you acknowledge your fears and that having fears is okay, who will support you and if they’ve faced those same fears, guide and mentor you. If you are mentoring someone, teaching them, coaching them, it’s vital that you do not make things easy for them. No fear means no opportunity to face your fear and beat it.

With this triumvirate – belief in yourself, belief in a proven way to beat your fears, belief in a strong community of friends to catch you when you fall – there is no fear you cannot overcome. If you want to improve yourself, search deep inside for your fears, pick one, and slowly start chipping away it it. Like all prisons, there’s always a weak spot from which you can make your escape.