Learning from Wintergrasp: Marketing On The Offensive 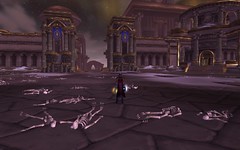 In the World of Warcraft, there’s an epic battlezone known as Lake Wintergrasp. Players who choose to play in this part of the game join one of two teams with either the goal of defending Wintergrasp Fortress or attempting to take it over from the other team.

Without delving too deeply into the game mechanics, for the defense, you need to stop the other team and their various siege engines. Typically, you do this by shooting at them a whole bunch of times, trying to take over their siege engine factories nearby, and attacking the offensive team’s camp.

For the offense, you need to build siege engines and take over the fortress, seizing control of a relic inside.

What does this mean for you and your marketing? Consider just how many distractions there are in marketing – a new social network to join every 10 minutes, a new meme to try and hop onto, a new shiny object that is the buzz of the moment and is forgotten in 15 minutes. Consider what you need to do to win, and where you can concentrate limited forces and resources. What’s the fastest path to victory? If you face lots of competition, in what ways will they be distracted or their forces divided, giving you an opportunity to focus, concentrate, and win? If you have to divide your forces, can you adapt quickly to changing conditions, or will you be overtaken because no one point is strong enough to hold?