I’ve had a puzzle for a little while. Actually, more than a little while, about 3 years. The puzzle is simple but not easy: I love the taste of Bertucci’s tomato sauce on their pasta but have never been able to figure out what makes it work. Try as I might about once a week, I’ve never broken the code. 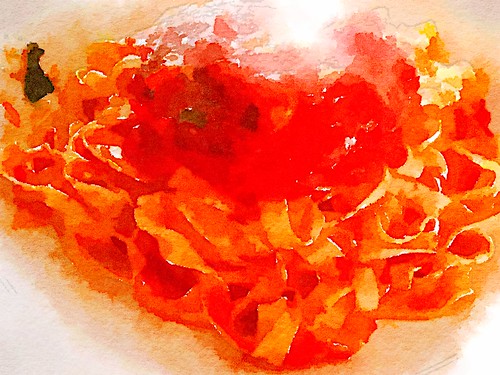 For those of you who may not know, Bertucci’s is an Italian-style restaurant chain of mostly pizza and pasta here in the US. Their hallmarks have traditionally been brick-oven roasted everything, but one of their lesser acknowledged trademarks is a delicious pasta sauce that goes well on just about any plain carbohydrate.

I’ve been trying to replicate its characteristics, which are:

Over the past three years, I’ve asked personal chefs and experts, as well as my overlord, Google, and no one’s had a satisfactory answer. I’ve tried to achieve sweet, but that leads to sugary more often than not. Tangy meant everything from vinegars to citrus juices, and it always came out like acid. Savory usually ended up with lots of carmelized vegetables in it – tasty, but not the goal.

Well, tonight was the accidental breakthrough. Here’s what seems to be the closest thing to a clone recipe.

1. Start with a large can of crushed tomatoes. Buy good quality, and buy canned, as canned tomatoes are actually fresher than anything you’re going to get at the store during the off-season. Obviously, if you have access to perfectly ripe tomatoes that are locally grown, go for it, but there’s no such creature in Boston in late November that’s natural. Open the can and toss in 2 teaspoons of sugar and a quarter teaspoon of salt. Stir, then let it sit for as long as you can. Ideally, if you can prep the can in the morning for that evening’s dinner, awesome. Even just 5 minutes is better than nothing, though.

2. In a non-stick saucepan (the non-stick is important!) add four tablespoons of the tomatoes (try to make it mostly chunks) plus a quarter teaspoon of garlic, and a teaspoon of olive oil. Start over 33% heat (on my stove, there are numbers 1 – 6, and I did this at 2, 6 being hottest) and cook until the water is driven off from the tomatoes. Stir a lot.

3. When the water is gone and the tomatoes are pasty, turn up the heat until the garlic mixed with the tomatoes changes color and darkens a little. It’s more than okay at this point if the fringes of tomato residue on the sides of the pan get toasty. Stir a lot, scraping the sides of the saucepan to get any toasty residue back towards the bottom.

4. When the garlic changes color to a darker shade OR the tomatoes are appreciably darker – whichever comes first, throw the rest of the can in. Stir like crazy. Add a quarter teaspoon cracked black pepper and a quarter teaspoon of sweet basil, dried.

5. Crank up the heat to 100% until the stirred pasta sauce boils, then turn it down to 50%; most of the water in the can will surface to the top. Cook with the lid mostly on (letting vapor escape) for 15 minutes.

At the end of the process, you’ll have a tomato sauce that tastes remarkably like Bertucci’s, close enough ideally to dissuade you from dropping $20 for a meal that costs a lot less to prepare at home.

One last secret of Bertucci’s is that the pasta is cooked al dente, or somewhat chewy. Whatever the directions are on the box of pasta, chop about a minute off the cooking time and you’ll have roughly al dente pasta. Al dente is important for two reasons: first, the pasta is a different texture, not mushy, and second, there’s still a fair amount of water in the pasta sauce. Cooking it al dente will let the pasta absorb a good portion of that water when it’s mixed together.

What I do typically is take the pasta as it reaches al dente, drain it, toss it in a large bowl, throw all the sauce on top of it, and stir for 5 minutes with a big spoon. This lets the pasta absorb excess water from the sauce and ensures that it’s evenly coated.

Give this a try and let me know how it works for you!

Also see this blog post about 5 easy ways to win at pasta for more pasta tips.