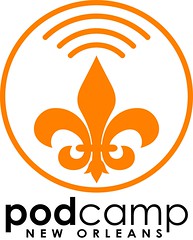 After a great discussion, the unanimous vote is for a PodCamp New Orleans, so we’re beginning the process of organizing and building this event. The domain names, podcampneworleans.com and podcampneworleans.org were bought tonight – like most PodCamps, we’ll use the .org and redirect the .com name. Next steps:

The major departure from your standard PodCamp is the fundraising team, which is independent of the organizers. The goal for PodCamp New Orleans is going to be to raise a large pile of cash, and instead of reinvesting it in a future PodCamp or sending it back to the PodCamp Foundation, any leftover funds remaining will go to relief efforts as selected by both the organizing and fundraising teams. It will be good to bring new media’s storytellers to the area to tell the stories that aren’t being told. It will be better to bring new media and a war chest that can make real, tangible change.

If you’re interested in being a member of either team, please comment this post with your name and what team you want to be on. We’ll get the web site, registration, and other stuff up and running soon.