A few friends have expressed concern that some spoilers from Harry Potter 7 would find their way to Twitter. After all, the book is already available (illegally) for download online, and lots of spoilers are floating around everywhere. For fans who want to remain unspoiled, a media blackout may seem like the only option, even on “friend” networks like Twitter. Happily, you don’t have to go dark on Twitter entirely – just use Yahoo Pipes to filter out spoilers.

If you want to remain unspoiled, switch to reading Twitter only on Google Reader, but filter it through Yahoo Pipes first with these settings: 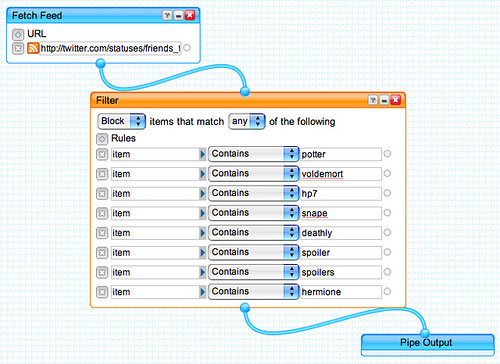 This will eliminate most of the keywords that would be used in a spoiler. Obviously, tweak and add your own.