You Ask, I Answer: Most Hated Business Jargon? 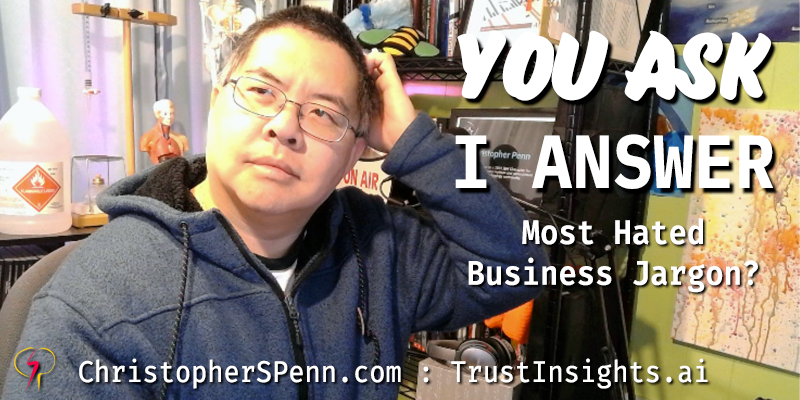 Ann asks, “What is your most hated jargon or business-speak? Why?”

You Ask, I Answer: Most Hated Business Jargon?
Watch this video on YouTube.

In this episode and asks, What is your most hated jargon or business speak? Why? I don’t know.

Like what, like flexible, scalable, turnkey integrated solution, or the the bizarre habit people have of turning nouns into verbs like we’re gonna decision this, we’re gonna solution this.

You’re going to solve this to decide.

But here’s the thing.

As much fun as we’d like to make of business jargon and things.

It’s not the jargon itself.

Is it the word that bothers you, because there are some words that bother people, you know, like, moist.

Interestingly, as a tangent, the people that don’t like the word moist, have negative associations with it.

But they don’t offer other similar sounding words like joist, for example.

It’s not the word, it is the person and the intent that is being used when someone’s talking in jargon or business speak.

Remember when maybe I don’t know if this is universal, but remember, in school, there was always that one kid who was just trying too hard to be cool, right? That kid had the accessories and spoken all the slang and jargon and lingo the day.

But there was something about that kid, they were just trying too hard to impress everybody, instead of being comfortable in themselves.

Or maybe another kid you ran into who used their being in the in group, whatever the in group was, when you were growing up, as also bullying mechanism, right? They would say, Oh, I was hanging out with my friends, and we did this cool stuff and things.

And their intent was to exclude you, and how they talked.

They intended to make you feel excluded.

George Bernard Shaw said, at best, every profession is a conspiracy against the laity.

We speak in, in jargon, our business speak links.

Instead of speaking in normal words, we are communicating to other people, our belonging or our intent to belong in a certain crowd.

And by definition, in using those words, we are trying to exclude other people.

Right? We are trying to exclude people who don’t know what those words mean.

Right? By telling you, hey, let’s double click on something.

What am I? What am I saying? What does that mean? Instead of saying, let’s take a closer look at that.

It’s a generational statement, right? If you’re saying let’s double click on something, the generation that grew up with these is like, right now just tap on that.

They tap on everything they swipe, they don’t click, or especially to double click right except when they go to an office and we make them use one of these things.

So that jargon is intentionally exclusionary towards people who are younger.

When you say let’s solution something or let’s decision something, what are you really saying? You’re saying that you’re making words more complicated than they need to be? Because for good or ill you have a culture within your organization where those words are used to obscure basic truth? Right, we’re solutioning that.

Okay? Are you solving the problem? By those verbal acrobatics, we’re obscuring the fact that we can’t talk plainly about something, maybe we can’t maybe, maybe have something to hide.

Maybe things are not going as well as they should be.

But that isn’t as speak is exclusionary now, we are in an environment.

And in a culture where many organizations are trying to be more inclusive, we talk about diversity, equity and inclusion.

If your slang, slang and business card business speak around.

You are running counter to that objective.

Right? If you’re saying a bunch of really complex, expensive words, when director used to work with you to talk to say, let’s make that more expensive, I’m just gonna punch you.

If you’re using languages exclusionary, to make yourself seem more important than you are, you’re running counter to those inclusivity principles.

Instead of saying, hey, let’s look at this more closely.

Other times people use jargon is a way to deflect.

Oh, someone is decisioning.

Okay? That sounds pretty weak sauce compared to I’m making a decision, or I’m deciding when you say I’m deciding, you are taking ownership something you were volunteering for accountability.

When you say someone’s decisioning, that it’s so confusing that it deflects accountability.

And that in turn means that when the defecation hits the ventilation, you don’t have to be accountable for those decisions.

Which is sort of contrary to again to a way a lot of people like to position themselves they’d like to be seen as bold and dynamic leaders.

Well, if you’re talking about decisioning, something, then you’re not right, you’re hiding.

If your intent is to hide, and you’re not trying to position yourself, if you absolutely, just try and keep your head down and avoid the roaming guillotines that wander around your organizational culture.

I’ve worked in organizations where you keep your head down, because it’s just a hot mess everywhere.

So jargon and business speak bothers us most when it is disingenuous.

So I don’t have a ton of hated jargon or business speak, I do have a bunch of people I don’t like.

Which I guess makes me a bit of a misanthrope.

I don’t like them because they’re trying to be something that they’re not instead of rolling with what they have.

Because if they have on whatever skills they have, they were honest about it.

They’d actually probably make a lot more progress and do more stuff and be more impactful because he wouldn’t spend so much mental energy hiding or deflecting or excluding, instead, they’d just be getting their work done.

So it’s a very good question of a complicated question.

But it’s an important one.

If you use a lot of business jargon, ask yourself why look in the mirror and ask yourself why What are you trying to communicate to other people? And is that congruent with your actions? And are there ways to speak in a way that are more clear and more inclusive, that still let you express the kind of leadership that you want to be demonstrating, or the kind of intent you want to be demonstrating, but without resorting to jargon? Anyway? Good question.