You Ask, I Answer: Social Media Metrics in Google Analytics? 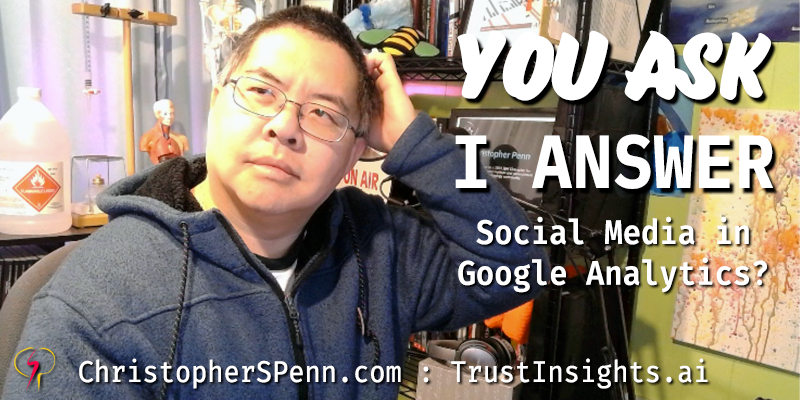 Christine asks, “What sort of things should a social media person be mindful of in Google Analytics?”

You Ask, I Answer: Social Media Metrics in Google Analytics?
Watch this video on YouTube.

In today’s episode, Christine asks, what sort of things should a social media person be mindful of? And Google Analytics? What should we be measuring? As social media people? Social media is a channel, right? It’s a marketing channel that gets people to your digital properties.

And so the question you have to ask is, what is the expectation for social media? Is it simply to build awareness? Are you trying to nurture people through the sales pipeline through the marketing operations funnel? are you expected to drive purchases? Right? If you’re an E commerce company, are you expected to sell T shirts online? The answer to that question will very much dictate what it is you’re looking for in Google Analytics.

But broadly speaking, those are the three categories that any marketing channel is expected to at least partially serve awareness, engagement, conversion.

With that, then, you know, the three general buckets of metrics that you should be looking at and Google Analytics, right.

So for awareness, you’re looking for new visitors from that channel, right? How many new people did you get to visit you? from Twitter, or Facebook, or Tiktok, or Instagram, or Snapchat or whatever, right? New people that you haven’t talked to before? That’s one for engagement for nurturing somebody along the pipeline, right? How many people did you get to engage in signing up for a newsletter, downloading a white paper, attending a webinar, checking out, you know, browsing on your on your online store, emailing or talking to a chatbot, all those things that indicate that somebody’s more than casually interested in your company, or things that can very easily be measured in Google Analytics, and B, shows that level of engagement.

That’s how you use Google Analytics for social media.

You look at the awareness, the engagement and the conversions.

Now, what’s challenging for a lot of organizations is knowing which to look at.

And in some ways, you want to measure all three to some degree, you want to measure all three to understand how your audience responds to social media, maybe you don’t drive a ton of new users to your website, but you accelerate the sales pipeline by creating more touches, you know, with a prospect, maybe prospects who don’t engage with a social media channel have 11 touches on average before conversion.

But maybe social media has 14 touches, but the time to conversion from beginning to end, maybe a seven days fewer.

So that’s an example of something where social media could be accelerating.

The journey to purchase in which case, you’d be comparing channel performance versus other channels like search, or email marketing conversions is pretty straightforward.

The challenge with conversions is that unless you are driving a decent amount of people and you, you’ve got something that they really want.

A lot of the time social medias impact is not felt at the bottom of funnel, right? It is more of a top of funnel channel similar to advertising, right? Yes, you can drive conversions with your ads.

But brand awareness is something that you can typically run a lot of ads for, and get decent results out of.

So one of the things you’re going to want to do is an initial audit, to look at your social media channels at each of those three layers, you know, awareness, engagement, conversion, and decide where does social media play the biggest role in your organization, and it’s going to be different for every organization.

And it’s very rare, that it’s just one of those places, it might be like 70% awareness, but 20% engagement and 10% conversion, or it could be the other way around.

It is going to depend on your business, your social media audience and things like that.

One other thing to keep in mind is how you define social media.

We typically define In social media is any channel where the value is subject to the network effect, meaning that

all other people make the channel valuable, right? So if your blog, it doesn’t matter how many people read your blog, write your blogs value does not increase, the more people who read it.

On the other hand, Tiktok gets more valuable for all existing members when new members join, right? Because there’s more content to enjoy this, and so on and so forth.

So that should broaden your perspective as to what is social media.

A site like GitHub, for example, is social media for coders.

And same for stackexchange.

YouTube is a social network, it is social media, right? You don’t just put up video and watch it, you participate, you comment, and the network effect applies.

Spotify is a social network.

It’s a music player, but it’s a social network, too.

It has those same sharing features.

So when you look at your channels and Google Analytics, one of the important things to consider is how many things actually fall under social media.

And then are you mapping all of your tagging and tracking tags appropriately, so that your social media efforts are getting the credit they deserve? So those are the kinds of things that I’d recommend that a social media person be mindful of in Google Analytics.